A Weekend in Paris; Not So Romantic Trip...

What to say about Paris? A beautiful city in the eyes of us but with a "sinister" underground life! Romantic but full of darkness, life full of romance but with violence touch.

Well last week, we decided to go to Paris despite:
Well, frankly, the threats of riots and bombings were not an obstacle, but the weather was bad! We started our journey from home around 4am going to Paris using the scenic roads instead of highways.  We used the St Cergue road to the border of La Cure (between Swiss and France on Jura) snow showered heavily but it was quite lovely because you can see the flawless and whiteness of the snow. Because it was so heavy you can't see clearly what was in front of you. The snow was still virgin with no evidence of tampering by humans or animals at 2am! But it was quite eerie. We arrived at Paris around 1pm.

We stayed at Etap hotel Porte de St Ouen which was located at the northern part of Paris. The place was still within the city center but located at the northern part of Paris and coming from south, we have to literally cross over the metropolitan.  Porte de St Ouen areas offered the cheapest hotel that we could find to accommodate our family and both my parents-in-laws.

Last minute decisions always lead to some mishaps due to improper plans!  We encountered two mishaps during our trip this time. One, never underestimate mother nature! Before travelling in winter season, always check the weather forecast!  Good planning, we made some geographic errors as we came in from South and so we had to cross the Paris region as arrived from the southern part. The road known as the pheripherique was jam (much worse than KL but not as worst as Italy)!

We were so lucky since the hotel is a walking distance from the Metro and got few Halal stores along the way from hotel to the Metro! Kira ok laa ( nak sedapkan hati). Sampai jer, dlm hujan tu, we headed to Paris i.e. the Eiffel Tower! My gosh! It was so cold due to the wind and the rain.  Me myself almost nak terbang jer. We managed to get few photos there despite the weather condition.  We decided to the tour bus.  So at least, we can cover most of Paris.

But all in all, despite the tension etc, we enjoyed our time there!  To visit Paris again, not now!  I think Paris is a place where it should be enjoyed by couples, so they can absorb in its beauty without distractions. In Sha Allah, I hope to visit Paris again with my husband when our children grow up.  Our own honeymoon trips in our senior years! 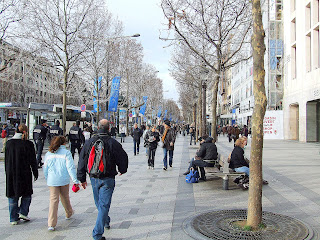 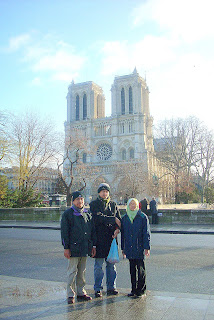