By yatiseman 17
Aug
Early August this year, we decided to travel to Sungai Besar for a farewell visit to our sister-in-law who’s migrating to Australia.  At the same time, we took the opportunity to rent a homestay in the middle of the paddy field to experience the serene and idyllic experience of kampung lifestyle. As it was a last minute decision, most of the homestays nearby Sungai Besar were fully booked! At last, we managed to book one known as Villa Gemilang Homestay situated at Parit 6½.  For a two-room homestays, it was quite affordable as the rate was only RM160 per night.

To get to Sungai Besar, we tried to avoid the Jalan Kuala Selangor route as the few times when we used this route, we were frustrated by the condition of the road and the traffic jam there.  Thus, we tried new route via Bukit Tagar which crisscrossed forested areas and two FELDA settlements. Along the route, we managed to make few pitstops in order to look for “pucuk midin,” a rare species of consumable fern.

Upon arriving at Sungai Besar, we saw some of the paddy fields have been cultivated.  Luckily, some are still not as the view of yellowing paddy field is so refreshing.  The children were awed by the rows and rows of green to yellow paddy field upon them and some even blackened as the farmers have burned the paddy stalks for replantation.  They were also awed by the cultivation machine!!

The view reminds us of Versoix where we used to live which were surrounded by acres of wheat field.  What makes it difference was in Versoix, the farmers would create wheat straw bales instead of burning them.  We could not believe our eyes when we saw similar bales at some paddy field! It seems that here, some farmers are resorting to using bales instead of burning them!!

Upon checking in at the homestay, the children are attracted few people who were fishing by the small canal along the paddy field. They were so excited to try fishing there and urged us to buy some fishing rods near Sungai Besar town. 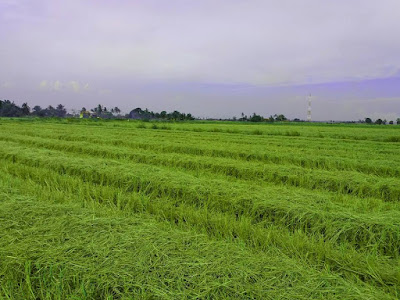 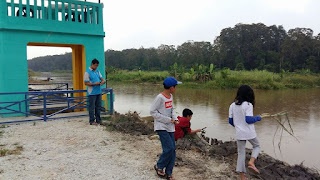 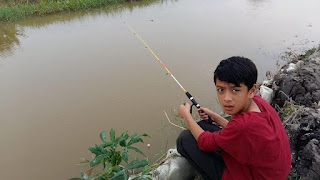